Although I supported Hillary Clinton in the 2016 presidential race, her defeat didn’t surprise me. The amount of time and energy that has been put into discrediting Hillary Clinton has been astounding, and it certainly didn’t start with “Crooked Hillary” or “nasty woman.”

I’ve never understood the right-wing obsession with absolutely destroying the Clintons. I can remember back in the 1990s when conservative pundits began calling our First Lady by her first name, Hillary, a moniker obviously intended to degrade her and to imply that she wasn’t worthy of an honorific. For more than two decades, Hillary Clinton did manage a successful political career despite that long, long pattern of disrespect, but ultimately she couldn’t overcome it, even though current vote tallies say she beat Donald Trump by 1.5 million votes. This pervading idea that Hillary Clinton is not worthy of our trust, our respect, or our votes began in the 1990s and led millions of Americans in 2016 to rationalize a vote for Trump by saying, “I just can’t vote for her.”

Recently, I was cleaning out some boxes of old mementoes and found this. Back before smart phones, before Facebook, even before email, people used to circulate these kinds of political rhetoric via fax machines. My very conservative father worked for the phone company and would bring these things home, and knowing that I favored Bill Clinton in 1992, he made sure to give me this one. The little dot-matrix fax information at the edge of the page dates it in September 1992, a month after I became old enough to vote, and two months before William Jefferson Clinton, AKA Slick Willie Clinton, would become president. If you take a moment to read these comparisons, the intent is obvious: to make then-candidate Bill Clinton so completely repugnant that no one would dream of supporting him. This onslaught of political mud is where Hillary Clinton’s controversial loss in 2016 began. 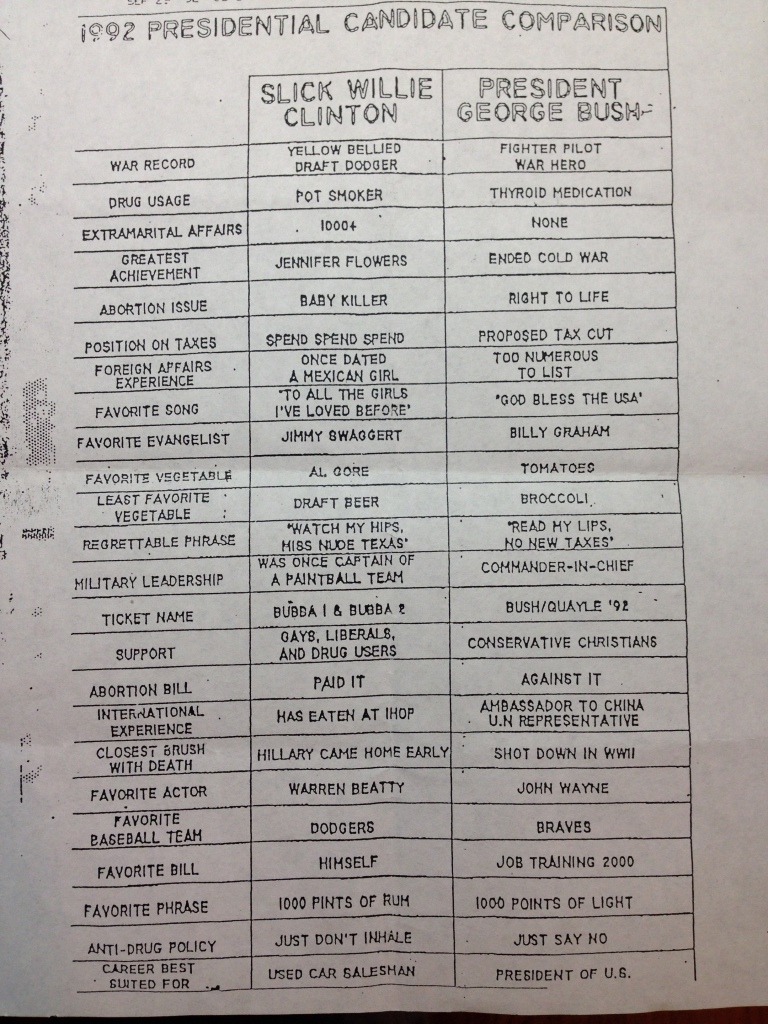