It was a Tuesday during my last week of summer break. My children and I had already spent about eight weeks together, and we were sulking around the house, looking for things to do. When we all three get that way, I like to suggest a good hike in the woods. It doesn’t involve a screen or the internet or even air-conditioning, and a lot of trails have either a small fee or none at all. Some of our favorites are the Deadening Alpine Trail and Cherokee Ridge Alpine Trail in Tallapoosa County, Chewacla State Park in Auburn, and Fort Toulouse in Wetumpka. We didn’t really want to drive very far this time, so we headed for Fort Toulouse.

After we got there and paid our small fee to the lady in the lonely little visitor center – $2 for me and $1 for each of them – we started on our usual route, the Bartram Nature Trail. There’s been a lot of rain lately, and it’s exceptionally hot in July in Alabama, so the mosquitoes and gnats were bad— but as we walked the path into the woods, so were the numerous (and very large) garden spiders, some of which had a span as wide as the palm of my hand.

We were plodding along, following the outlined route that leads to the open meadow where the fort is, when I noticed a gray stone off to my left on a short path that leads to the shed where their work equipment is kept. I’d never noticed the stone before, since we don’t go that way, but this time I did and walked over. 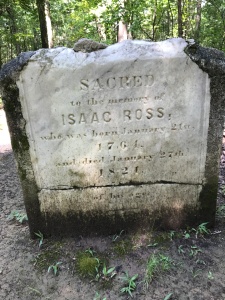 It was a headstone, an old one that had broken and been repaired, for a man named Isaac Ross, born in 1764, died in 1821. I stood for a moment and wondered, why on earth was this man’s grave in the middle of the woods at Fort Toulouse? However, I couldn’t stand around for long and indulge my curiosity. My children kept saying, “Dad, come on!” since they were being eaten by bugs!

Isaac Ross, who is buried in the woods along a nature trail outside of Wetumpka, Alabama, was born in Camden, South Carolina more than a decade before the Declaration of Independence. The few disparate records that appear for him online say that he married a woman named Parthenia Brown, who was from Virginia. She died in 1833, about a dozen years after her husband, in Alabama, but she is not buried beside him.

Some of the best clues to Ross’s life come on the mauve-colored sidebar on his page on the Find A Grave website. (If you’re not familiar with the website, it’s not as moribund as its sounds.) The researcher who put the page together did quite a good job of pulling tidbits from various sources: Isaac Ross appears to have served in the Revolutionary War under the “Swamp Fox” Francis Marion, owned land near Tallassee in eastern Alabama, and had seven children. The last small paragraph relays that the area around Fort Toulouse was once part of a plantation, which might explain the odd placement of the grave, as the place is now arranged.

Yet, the Montgomery Genealogical Society offered a little more:

“As early as 1815, Isaac Ross arrived here with his son William from Camden, SC. It is said that he had a grant of 742 acres. In 1816, he engaged Gen. John Coffee to lay off a town for him at Fort Jackson (formerly called Ft. Toulouse). He hoped that it would someday become Alabama’s capital.”

As for the strange placement of his grave, one archival document from Elmore County, Alabama explains that “at one time, several of Andrew Jackson’s men were buried here but they were moved to Federal Cemetery in Mobile.” Why poor old Isaac was left there, I never did find out.

One of the reasons that I take my children on these excursions, instead of passing time a a mall or a Rockin’ Jump or a Chick-Fil-A playground, is to teach them this: if our eyes are open, we stumble upon history everywhere we go. Even in the spider-infested woods outside of the relatively unimportant small town of Wetumpka in central Alabama, where, if you make that unassuming turn off Highway 231 and go a few miles down a two-lane road, you’ll be standing on one of the more important sites in the formation of this American nation, where Native Americans lived and died during the years that Europeans call the Middle Ages, where French and British colonial forces later fought over a strategically advantageous bend in the river, and where men like Isaac Ross came to build the place we now call Alabama.