Foster Dickson is a writer, editor, and teacher in Montgomery, Alabama. He is the author of Closed Ranks, the editor of Nobody’s Home and level:deepsouth, the coordinator of the Fitzgerald Museum’s annual Literary Contest, and currently, a Literary Arts Fellow for the Alabama State Council on the Arts.

The third reading period for Nobody’s Home: Modern Southern Folklore ended on May 15. Foster is currently working with those submissions and had all responses back to the writers by June 1. The first two batches of accepted works were published on January 15 and March 22, and this third batch is coming on June 15. Submissions are still being accepted for consideration during a fourth (and final) reading period, and that deadline is August 15.

Nobody’s Home is an online anthology of creative nonfiction about the prevailing beliefs, myths, and narratives in Southern culture over the last fifty years, since 1970. It is supported by a Literary Arts Fellowship from the Alabama State Council on the Arts. The fellowship “recognizes artistic excellence as well as professional commitment and maturity. It is intended to contribute to the further development of the literary artist and the advancement of his or her professional career.”

On April 27, Foster announced a summer reading offer for Closed Ranks: read the book, then join him and members of the Whitehurst family on Facebook Live to talk about the story and its long-lasting impact. The Facebook Live events will be held on two Sundays, June 27 and July 25, and anyone is welcome to attend one or both. Though the book is widely available, the Reading Herring Bookstore in Montgomery is offering a discount on copies purchased directly from them. Reading Closed Ranks is not a requirement for joining the two conversations, but it will help to be familiar with the story and its details before coming to participate.

The results for the third annual F. Scott and Zelda Fitzgerald Museum’s annual Literary Contest were announced on Monday, March 15. The theme for 2020 – 2021 was “The Education of a Personage,” to honor the centennial of Scott’s debut novel This Side of Paradise. This year’s theme, which comes from one of the novel’s section titles, implies works about learning, growing, and maturing. The annual contest is open to high school students and college undergraduates, and submissions are accepted each year from September 1 ’til December 31. The judges were Ashley M. Jones and Alina Stefanescu.

Foster re-designed and began coordinating the contest in 2018, a year that marked the centennial of Scott and Zelda meeting in Montgomery. The first year’s theme was “What’s Old Is New,” giving a nod to the daring and innovative spirit of Scott’s and Zelda’s artistic and literary work, and in 2019–2020, the theme was “Love + Marriage” to honor the couple’s 1919 love affair and 1920 wedding. The theme for year four will be unveiled in August 2021. 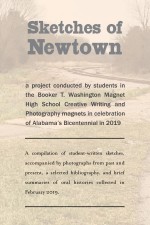 The Sketches of Newtown books arrived from the printer in early March. Approximately half of the books have been shared with current and former Newtown residents, while the remaining half have gone to student contributors, organizations that supported the project, and archival institutions.

This student project was funded by an Alabama Bicentennial Commission education grant as a follow-up to the February 2019 oral history event in Newtown. It had Foster’s high school Creative Writing students researching and writing about this north Montgomery community, which began as a housing settlement for enslaved people in the 1830s. A second oral history event, originally slated for December 2020, had to be cancelled due to COVID concerns, though the book publication was completed in its stead. The entire print run of the book was given away at no charge. An e-book is available by clicking here.

On March 1, level:deepsouth marked its first full year online! This online anthology was created with the goal of documenting the experiences of Generation X in the Deep South during the 1970s, ’80s, and ’90s by collecting personal essays and memoirs about our lives back then and since then. The project is wide open for submissions. Though any submission that fits the subject matter will be considered, Foster is especially interested in essays or memoirs by writers who were born between 1965 and 1980, and who grew up in the region.

Foster is currently working on a commemorative/historical book about Montgomery Catholic Preparatory School for their upcoming 150th anniversary celebration in 2023. Montgomery Catholic was founded as St. Mary of Loretto School in 1873 by the Sisters of Loretto. Over a century-and-a-half, St. Mary of Loretto evolved into a regional K-12 school with three campuses, to become one of the longest-standing continuously operated schools in Alabama. Foster’s book-length treatment of the school’s history is right now a work-in-progress, and no release date has been set.

In March, Foster was included in the article, “Race is a thorny topic in America. Some say schools must join the conversation.” by the Montgomery Advertiser‘s race and ethnicity reporter Safiya Charles.

Foster was a presenter at the Monroeville Literary Festival this year! The 2021 festival is virtual, not on-site in Monroeville, and his presentation was on Thursday, March 4 at 2:00 PM. The festival continued on March 5 and 6 with presentations and awards ceremonies.

In July 2020, Foster did an interview with The Alabama Writers Cooperative’s Alina Stefanescu about the fellowship and his other current projects. You can watch that video here:

In February 2020, Foster had articles published in It’s a Southern Thing and the Montgomery Advertiser. He wrote about the Lillian E. Smith Center in Clayton, Georgia for the former publication and contributed a “Love Letter to Montgomery” for the latter’s series. You can click on the red links to access them. 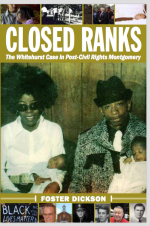 Foster’s most recent book Closed Ranks: The Whitehurst Case in Post-Civil Rights Montgomery was released in November 2018 and is available in paperback and e-book formats. The release was covered by the Montgomery Advertiser, WSFA, and The Crime Report. If you missed that event or others, the Read Herring bookstore has autographed copies in stock. You can also read the Alabama Writers Forum’s review of the book.

To schedule a signing or book talk, please use the contact form on the About page. While you might think of these as public events that occur in bookstores or on college campuses, Foster will also schedule invitation-only readings and discussions with book clubs, civic organizations, and school groups.

Any of Foster’s books, including I Just Make People Up about artist Clark Walker and the anthology Children of the Changing South, are available on Amazon and through other national retailers. For a complete listing of Foster’s books, visit his Author Central page on Amazon.

*The photograph that appears in the header of the website was taken on US Highway 80 between Newbern and Selma.