Black Elk Speaks: Being the Life Story of a Holy Man of the Oglala Sioux
by John G. Neihardt
My rating: 4 out of 5 stars 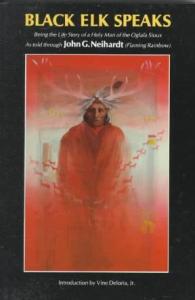 The road that led me to Black Elk Speaks was a circuitous one. Though I’m not indifferent to it, I’m not particularly interested in Native American history, nor in the history of American West, and this book is both. My introduction to Black Elk came instead through reading Sonny Brewer’s novel The Poet of Tolstoy Park, which tells the story of Henry Stuart, an Idaho college professor who retired to convalesce in Fairhope, Alabama in the 1920s. Stuart, who was a real person, was a devotee of Leo Tolstoy and, after hearing Black Elk speak, was influenced by the Oglala Sioux holy man as well. I enjoyed Brewer’s novel when I read it back in 2005, and it has always been my habit to look into things that people I like also like (as in discovering Charlie Parker’s music through reading Jack Kerouac.)

However, this book stayed on my reading list for about more than a decade before I bought a copy. As a collector of oral histories myself, I’m a fan of the genre, and that’s basically what Black Elk Speaks is: a book-length oral history told by a very elderly Native American and collected in the 1930s by a white poet. The narrative begins when Black Elk is nine, in the early 1870s; he has a religious vision that sets the trajectory for his life. The reader is then carried through the turbulent period when white Americans – who he calls wasichus – are settling/conquering/usurping the West. In his story, Black Elk relays with candor the love he has for his people and for a way of life that he saw disappear in the late 1800s, while remarking with equal candor about the violence it took to hold off the white soldiers who were enforcing unjust treaties made with a few tribal leaders who lacked the authority to make deals on behalf of all indigenous people who occupied those lands. The latter portions of the book also discuss his time traveling in Europe with Buffalo Bill’s Wild West show and finally his settling-down into an undesirable way of life forced on him by the American government.  As a person largely ignorant to the specifics of this history, I’m thankful to have read a firsthand narrative from a person who both lived it and stood up bravely against it.

Although Black Elk was an Oglala Sioux, his story is one of many like it in American history. As Americans, we regularly insist on our own rights and freedoms, while simultaneously opposing others who stand up for their rights and freedoms. In Black Elk Speaks, one of US military’s first moves was to build a roadway through the land for wagons and carriages, but his people knew that would both disturb the bison and lead to more intrusions. Likewise, because all indigenous people hadn’t agreed the treaties, each side had to kill or be killed in battles that decided the very American question, whose rights win out when both parties can’t have their way?

In historical retrospect, we know that Native Americans were mistreated – in Black Elk’s words, you can’t eat lies – but now, in the fact of the realization, a new question has to be asked, what do we do remedy those past wrongs?