Posted on January 18, 2020 by Foster Dickson Leave a comment 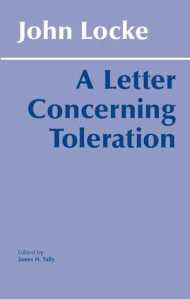 A Letter Concerning Toleration by John Locke
My rating: 4 of 5 stars

I chose to add this work to my English 12 syllabus this year since our new textbook is thematic, not chronological, and the fourth unit is called “Seeing Things New.” By the time Locke was writing this in the late 1600s, Europe undergone more than a century of the Protestant/Catholic back-and-forth, and it probably seemed like time for a new, more rational approach to prevail. I had read the letter several years ago on my own and felt like it laid a solid groundwork for why we have a separation of church and state in America. On the one hand, reading this letter is a slog. The diction and syntax are indicative of heavy, Enlightenment-era philosophical prose, some of the spellings are unorthodox— and there are lots of semicolons! But for readers who put forth the effort to dig in, take the time, and get through it, the intellectual rewards are there. I don’t necessarily agree with everything that Locke writes here, but his examination of the differences between civil authorities’ raison d’etre and the meaning of religious experience is thought-provoking.