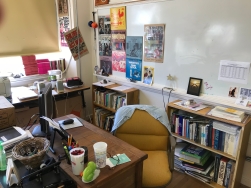 Foster Dickson is an award-winning teacher whose experience includes working with high school students, middle-grade youth in a summer camp, incarcerated men, and college freshmen. Foster taught creative writing at an arts magnet high school from 2003 until 2022 and regularly engaged his students in experiential learning projects involving community partnerships or events. In 2022, he accepted an instructor position in the English department at a small liberal arts college and is now beginning a new chapter in his teaching career.

From 2009 through 2015, he coordinated educational outreach efforts for the Alabama Book Festival; in 2013, he attended the Alabama Education Association‘s Emerging Leaders training; and in 2019, went out to Montana for Arizona State University’s National Sustainability Teachers’ Academy.

Top and recent posts about education:

“Year 19 in the Classroom”
published August 2021
“I enjoy teaching and I’m thankful for it. I’m also thankful that both I and my family are generally healthy. I got vaccinated last winter, so I’ve got that going for me, too. But watching the news and seeing the situation as it stands right now, I’m reminded that every teacher doesn’t have what I have. Neither does every student.”

“Learn the lesson and move on.”
published December 2020
“Many people won’t be sad to see 2020 in the rearview mirror – except for maybe online retailers and billionaires – but among the wreckage, this teacher sees one lesson that we can learn.”

“Farm School Lessons and My Stubborn Optimism”
published November 2019
“One of my goals with this sustainability effort at my school is demonstrating how the inconvenience of ‘going green’ – small-scale gardening and urban farming included – is not as great as some people might assume.”

“When my school burned . . .”
published August 2018
“I know that the faculty, staff, administrators, students, parents, alumni, and community supporters from Booker T. Washington Magnet High School have the desire and the fortitude to make this work, and what I saw yesterday is that we will have lots of help from near and far. ”

“Field Trips to Nowhere”
published April 2018
“What I hope the students will see – and I believe that they do – is that economic poverty is in no way coequal with spiritual poverty.”

“The Three-Legged Stool”
published March 2018
“For the paradigm of education to succeed, all three – teacher, student, and parent – must be in place. Teachers must provide instruction, assignments, opportunities, and tutoring. Students must receive instruction and do their assigned work. Finally, parents and guardians are there to ensure that their children study, do their homework, and get adequate rest.”

“Teach.”
published December 2016
“Seldom in my adult life have I been in the presence of someone whose suffering and whose humility about that suffering have combined to such great effect.”

“Apoplectic, or I am more than a number.”
published June 2016
“In my classes, I’ve sometimes called a student’s grade ‘that stupid number.’ This periodic outburst has been borne out of frustration that some students obviously cared more about the numerical grade than about learning. ”

“Tiny Glimmers of Hope”
published May 2016
“I’ll be among the first to agree that the education system in Alabama needs to change. However, we can’t improve education by reducing staff and resources, increasing class sizes, and cutting employee benefits, while continuing to require those remaining employees to teach and to meet federal regulations and state law.”

“What Foxfire could have been— and still could be”
published January 2016
“No amount of dollars, nor any computer-based program will ever accomplish what human beings working together can accomplish. About the value of community-centered experiential learning, I’ve told my own students’ parents many times, ‘They may not remember my lectures the next week, but they’ll remember every field trip we ever take.'”

“An Even Dozen (Years in the Classroom)”
published June 2015
“Every once in a while, a student who thinks she wants to be a teacher will ask me, “When did you know you wanted to be a teacher,” and I answer her by saying, ‘I never did want to be a teacher.'”

You can also read Foster’s essay, “Writing is Activism,” included in NPR’s This I Believe project in 2007.

In addition to teaching and writing, Foster was involved in the theater, mostly as a techie, in high school and college, and he has played guitar for over thirty years. Foster worked his first theatrical production as an eighth grader, opening and closing the grand drape for “Once Upon a Mattress” at his school, and was later in the Technical Theater component at the Carver Creative and Performing Arts Center in high school. From 1987 – 1993, he worked shows at the Alabama Shakespeare Festival, the now-defunct Montgomery Little Theater, Huntingdon College’s now-gone Dungeon Theater, Theatre AUM, and Montgomery’s historic Davis Theater, and had a bit part in the 1980s Civil Rights-themed movie Long Walk Home, which was filmed in Montgomery.

His one accomplishment as a guitarist has been playing lead guitar on the song “500 Miles” on Sarah Elizabeth Whitehead’s Where the Redbuds Bloom album, but you can also hear him playing the background music on the “Travels” videos for his Patchwork project in 2009 and 2010.