In early 2015, Foster created an extracurricular school garden project at the arts high school where he teaches. The project was designed to provide students with opportunities to learn about raising flowers, vegetables, and herbs on a small scale without the use of chemical fertilizers and pesticides. The original project had six 8′ x 4′ raised beds, a compost bin, and a rain barrel in a back corner of the school’s campus. The image on the left, taken during the time it was built, was from March 2015.

After an August 2018 fire caused the school to relocate to a temporary location, the project was rebuilt on the site of what had once been an elementary-school playground. That new garden had two 10′ x 30′ in-ground tracts, which more than tripled the square footage for growing from 192 to 600. The image below shows a morning when students were planting there.

In the summer and fall of 2019, Foster attended the National Sustainability Teachers Academy, Camp McDowell’s Farm School Workshop, and the ASAN Food & Farm Forum. With that new knowledge, the project began to add activities related to sustainability and healthy eating, too. A school-wide recycling program was created, and guest speakers were arranged. 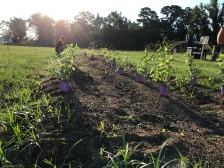 Unfortunately, the school closures during the COVID-19 pandemic halted the project. After a rainy winter in early 2020, students were sent home from schools in March at about the time for spring planting. With the majority of students continuing online during the 2020 – 2021 school year, the school garden lay fallow for more than a year. Despite Foster’s “stubborn optimism” in late 2019, there was no way to continue the school garden without student involvement.

In 2021 – 2022, with students back in-person and a move to a new campus in the near future, Foster led a group of students in re-establishing garden in order to leave it intact for the next school that would occupy what has been a temporary campus for the arts high school. Here is a news story about the rebuilding efforts done by the school’s Broadcast Media magnet in March 2022.

Foster was also active in the Old Cloverdale Community Garden from 2015 until 2021. There, he had a raised bed and maintained a worm farm to produce fertilizer for the gardeners. His work in the community garden began when he helped to clear the vacant lot so that construction could begin. For most of that time, he volunteered doing regular maintenance and whatever tasks were needed.

To learn more about the school garden project and its history, click on the links below:

A Moveable Feast: Daring to Plant in Mid-August!
published August 2019

A Moveable Feast: A Big Ol’ Pile of Dirt (for a Rebirthed School Garden)
published April 2019

A Moveable Feast: The Rebirth of a School Garden
published January 2019