Foster Dickson is a writer, editor, and teacher in Montgomery, Alabama. He is the author of Closed Ranks, the editor of Nobody’s Home and level:deepsouth, and the coordinator of the Fitzgerald Museum’s annual Literary Contest.

Foster’s work has centered on subjects from the modern South, Generation X, the arts & humanities, education, and social justice, especially untold and lesser-known stories. His most recent book Closed Ranks: The Whitehurst Case in Post-Civil Rights Montgomery, about a police-shooting controversy in the mid-1970s, was published by NewSouth Books in 2018. Foster’s previous book Children of the Changing South, published in 2011, contains memoirs by eighteen writers and historians who grew up in the South during and after the Civil Rights movement. Other published books are biographical works on two often-neglected Southerners, The Life and Poetry of John Beecher (Edwin Mellen Press, 2009) and I Just Make People Up: Ramblings with Clark Walker (NewSouth Books, 2009), and a book of poetry, Kindling Not Yet Split (Court Street Press, 2002). He also acted as general editor for the place-focused curriculum guide Treasuring Alabama’s Black Belt (Alabama Humanities Foundation/Auburn University at Montgomery, 2009) and wrote the curriculum guide for Alabama in Fourteen Foods (University of Alabama Press, 2019).

Foster Dickson taught Creative Writing at Booker T. Washington Magnet High School for nineteen years, and during his time there, he was awarded grants, fellowships, or residencies from the Southern Poverty Law Center, the Gannett Foundation, the Surdna Foundation, the Lillian E. Smith Foundation, the Center for Arts Education at the Boston Arts Academy, the Alabama State Council on the Arts, and the Alabama Bicentennial Commission. Foster was named the state’s Teacher of the Year by the Alabama PTA in 2010, and was a participant in Arizona State University’s National Sustainability Teachers’ Academy in 2019. He joined the faculty at Huntingdon College in 2022.

You can keep up with Foster on Facebook, Amazon’s Author Central, and Instagram. (Foster has deactivated his Twitter account.)  You can also learn more about Foster and his work here by clicking on the links below: 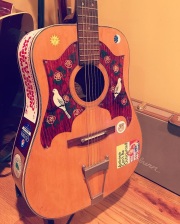 Outside of writing and teaching, Foster is usually either messing around on his guitars, watching old movies, walking with his dog Chip, or finding a reason to be outside. His other interests are his Catholic faith, cooking and eating, craft beers, gardening and urban farming; classic country, rock, and soul music; classic and independent films, family history, social theory, and politics. Foster likes Levi’s jeans and Liberty overalls, a good bacon cheeseburger with Coca-Cola, a cold Grapico on a hot day, Miller High Life and New Belgium Fat Tire, black coffee with a little honey in it, Chilean cabernets and Argentine malbecs, spider lilies and Mexican petunias, really long Grateful Dead live tracks, and a plate of homestyle food with one vegetable of each color. His turnoffs are bottled water, ice-breaker activities, pop country, bell peppers, black olives, sipping lids on coffee cups, traffic, waste, and most of all, rudeness.

Foster is not currently available for longer (book-length) freelance projects, but he is available for shorter assignments and for speaking engagements or guest artist presentations.

For more information, you can contact him using the form below: