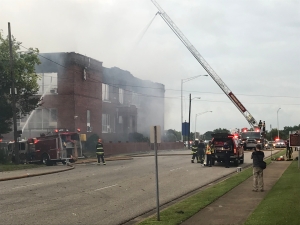 This is a post I never would have wanted to write. In the small hours of Saturday morning, August 18,  Booker T. Washington Magnet High School, where I teach, burned. I woke up about six o’clock to my wife whispering, “Honey, you’re phone keeps going off. I think you need to check it.” I could tell from her voice that she already knew what was going on and that it was bad. When I looked, the array of text messages from faculty members were sharing the news that the historic building on our campus had been engulfed in flames since about three AM. The building, which housed our Visual Art, Photography, Broadcast Media, and CAT (computers) magnets, as well as our media center and guidance office, was a total loss.

The main solace that we could take was that the fire occurred in the middle of the night, so no one was there: no students, no teachers, staff, or administrators. Everyone is safe, and that matters most. We can replace “stuff”— sort of.

The destruction of what we called Building C was hurtful for more than one reason. In the most immediate sense, the four affected magnet programs had not only supplies and equipment, but years’ worth of student work, including the works that some of our seniors would use in portfolios for scholarship applications this spring. In addition to those losses, the Photography, Broadcast Media, and CAT magnets had long been documenting our school culture, and we stored our school’s yearbooks in the media center, which was on the third floor of Building C. Lots of history was in that building. 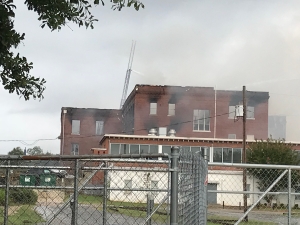 In an even longer historic sense, before Building C was one building on the campus of Booker T. Washington Magnet High School, it was the central building in what had been the all-black Booker T. Washington School. The building that burned was built in 1896, and it had a one-hundred year history before our programs got there. (That history included a period as a vocational training school in the late twentieth century, between school integration and our arrival in 1997.) So, Montgomery didn’t just lose one building on the campus of its arts high school last night; generations of Montgomerians lost a structure that housed a variety of educational opportunities for a variety of students. In short, Building C meant many things to many different people.

Though my classroom is in the building across Union Street from the fire, and was untouched by that devastation, I can’t say that my students and I are “unaffected.” On Monday morning, teachers will go to our campus to gather our belongings and vacate the premises, to move into a closed elementary school on Old Hayneville Road in west Montgomery. While nothing of mine burned, my Creative Writing students and I are losing a lot, too. In my fifteen years, we’ve nearly covered the walls with all manner of memorabilia – posters, flyers, pictures – and each year, when seniors graduate, they write on the walls with sharpies, leaving messages for future students. We’ve built a program in our room, created traditions, forged a heritage that incoming students could see and understand as something they would be a part of. We aren’t “unaffected.” We’re losing a place— which, if you know anything about that concept, means a great deal. Within a few weeks, hundreds of people will drive past that plot of land bisected by Union Street and say, “That’s where our school used to be.” 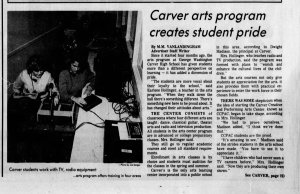 However, hope isn’t lost. I spent the day yesterday either standing looking at our crumbling campus or glued to social media, and I saw how much our people care. And I’m privy to a lot of the sentiments that they/we share. I am an alumnus of BTW’s forerunner program, the part-day Carver Creative and Performing Arts Center (CCPAC) housed at Carver High School, which was founded in 1983. (The image at left is from January 1984.) I was a Technical Theatre student at CCPAC from 1990 until 1992; then my sister-in-law taught Musical Theater there beginning in 1993, and she was part of the CCPAC-to-BTW transition in the later 1990s; then I became the Creative Writing teacher in 2003. My history with this school goes back nearly thirty years, and I’m one of the few people to have both attended and taught in the program. CCPAC/BTW has gone through changes before— and is now going through another. (As one historical aside, when CCPAC was originally to be moved, along with LAMP High School, into a renovated shopping mall in the mid-1990s, a tornado destroyed that mall before the move, and our Union Street location was really meant to be temporary.)

I know that the faculty, staff, administrators, students, parents, alumni, and community supporters from Booker T. Washington Magnet High School have the desire and the fortitude to make this work, and what I saw yesterday is that we will have lots of help from near and far. The offers of assistance poured in yesterday from alumni, as well as from friends in government, in the school system, in nearby school systems, in other public schools, local private schools, local businesses— I got a friend request on Facebook yesterday from a lady who wanted me to know that there were farmers co-op feed stores that already had donation buckets on the counter.

I’ve been a loudmouth for years about how Montgomery needs Booker T. Washington Magnet High School. In the early 1990s, I was a teenager who wasn’t interested in sports, and the Technical Theatre component not only kept me busy and out of trouble, it gave me exactly what I wanted: to work around and with every kind of art and artist I could. For thirty-five years, the arts programs, which started at CCPAC and continue at BTW, have done that for hundreds of Montgomery teenagers like me. In the South, we put money into academic initiatives and we pour money into sports programs, and for a lot of kids, that’s fine— but I tell everyone who’ll listen that having strong arts programs is just as important, especially for teenagers whose creative ideas and contributions can get lost in a traditional setting. While I’m sympathetic to the current students who are like I was, I’m also aware that I teach an array of students who are multi-talented in the arts, athletics, and academics, and all of them with their many gifts are proof that Montgomery needs BTW.

We’re going to recover from this. Put simply, we are about to start writing the third chapter in our program’s history. And if you’d like to help us, you can. Our school has a 501(c)3 nonprofit called The FAME Foundation, and they are accepting donations, 100% of which will go directly to the school’s needs.