Posted on July 23, 2020 by Foster Dickson Leave a comment 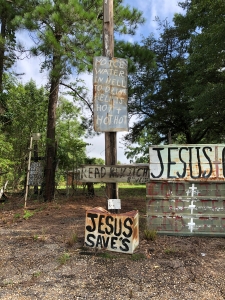 Back in the 1980s and ’90s, going to the House of Crosses was a rite of passage for us teenagers. The property, which sprawls for about a hundred yards along both sides of an otherwise inauspicious two-lane county road, was a massive testimonial to a doomsday ideal that sprung wildly out of Southern evangelical Christianity, and its monolithic contents were the creation of a man named WC Rice.

Born in 1930, William Carlton Rice claimed to have been saved on April 24, 1960, and according to one source, began his notorious work in 1970s. The rumors among local teenagers said that he freaked out after his family was killed by a drunk driver. Those rumors were likely spawned by one display in his front yard that contained three tombstones, all bearing Rice names. Yet, a source more credible than teenage banter has him finding Jesus after his stomach ulcers were cured. Frankly, the drunk-driving story is more interesting, and even if that hadn’t been available to us, it’s unlikely that a bunch of Gen-X teenagers would have circulated a story about a stomach ailment.

By the 1980s, WC Rice’s House of Crosses – also known as the Victory Cross Garden – was at its peak, chock-full of rusty signage with sprawled messages. To an ordinary visitor, there seemed to be three parts to the whole thing: the roadside display in front of the house, the mass of crosses and signs in an adjacent lot, and the chapel across the street. Up on a small hill sat Rice’s home, which was easily the most mundane and least decorated aspect of the place, but his old red truck and adjacent garage were both covered in his signature imagery and slogans. There was no apparent structure to what is now considered a folk-art treasure, and it was easy to believe anyone who claimed that he put up a new sign or cross every day.

Riding up to the House of Crosses from Montgomery felt like a trek. Rice’s place was off Highway 82, north of nearby Prattville, in an area just country enough to feel like it was off the beaten path. As a general rule, we weren’t supposed to leave town at our age, so there was the double-dog-dare of seeing the House of Crosses and of risking a parent finding out where we’d gone. Those trips were usually prompted by the realization that someone among us hadn’t ever been there. “You’ve never been to the House of Crosses? Hey— she’s never been to the House of Crosses,” someone would exclaim. And the retort from someone else: “Aw, we’ve got to go! You gotta see this.” Then the hazing would start. The rumors and anecdotes would fly until it was time to go, and it even continued in the car on the way up there. This was a time before the internet, when we couldn’t pull up pictures for the person to see in advance, so the goal, of course, was to have unsuspecting first-timers scared out of their wits before getting there to see it for themselves.

And it was a little scary. A little. Where Rice’s property sits, once you pull off Highway 82, the small road looks perfectly normal as you come upon a veer to the right. Then, there it is. The quarter-acre plot next to the house comes first. Littered with crosses and signs, blood-red paint on old pieces of metal roofing and abandoned window units, the site was something to behold the first time you went. Especially with all of that build-up on the way there. More than anything, the House of Crosses was shocking, not because of its messages, but because of its size.

Of course, the little paved parking area in front of the house was always littered with broken beer bottles. Despite the fact that the whole thing was a warning against immoral behavior, the very nature of the project incited some teenagers – and maybe some adults too – to consider the House of Crosses among their destinations-of-choice during a night of drunkenness. Some Friday or Saturday nights, that little space was covered up by eight or ten cars, teenagers from any of the surrounding towns, as though a bunch of us had the same idea at once. I couldn’t tell you how many times I went there with my friends, half-dozen or more, but it never stopped being exciting.

The House of Crosses would have remained, for me, a mystery had we not opted one night to walk up WC Rice’s driveway and knock on his front door. We were nervous, of course, and the move was a direct result of someone saying, “I bet you won’t go up there and talk to him.” Which was certainly followed by someone replying, “I will, if you will.” Rice was a nice man, and unlike his property, fairly ordinary-looking save a long goatee on his chin and a very large metal cross around his neck. He invited us in and was apparently used to this, since he had a sign-in guestbook on the counter. His family was sitting together in their small den watching the televangelists on the local religious channel. They said hello and also treated our presence as normal, until one girl in our group, looking around at even more crosses on the walls, said out loud, “Jee-zus Christ!” Their attention snapped toward us, and we also sensed the faux pas she’d just committed, taking the Lord’s name in vain. That was our cue to cut the visit short. Rice didn’t say a word about it and seemed noncommittal about our decision to head for the door.

Today, the House of Crosses is a sparse remnant of what it was, but that hasn’t stopped Rice’s descendants from posting a sign declaring that it’s for sale for $25 million. WC Rice passed away in 2004, and fifteen years of neglect has seen trees to grow up, paint to fleck, and – I feel sure – thieves to do their work. Apparently, Time magazine included it in their “Top 50 American Roadside Attractions” in 2010, but I don’t see why, or why they waited so late. I can’t imagine an old couple in a Winnebago being glad they stopped.

One day, recently, during the coronavirus quarantine, my kids were complaining that there was nothing to do, so I had the bright idea to take them there. We loaded up in my truck, and the whole way there, they kept guessing where we might be going. All I could say back was: “You’ll never guess.” At their ages, without the context of teenage chicanery, and in broad daylight, they were mostly unimpressed— a reaction that made me kind of sad, considering what that weird old place was to my teenage years. The simple truth, though I hate to admit it, is: it’s just not the same, going with your dad.

Below are more images from that recent trip: