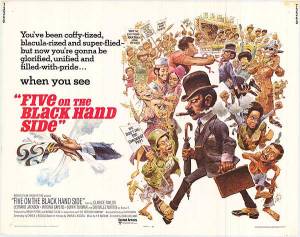 The 1973 film adaptation of Charles Russell’s play, Five on the Black Hand Side, came on the AMC the other night, and I saved it to watch last weekend. The film tells the story of an African-American family in Los Angeles that is mired in arguments over the social/political issues of the day: black power, institutional oppression and responses to it, women’s rights and the significance of black women, pan-Africanism, clothing and hairstyles, name-changing, and urban life. Although, I have never seen or read the play, after seeing in the opening credits that Five on the Black Hand Side was originally a stage play, the dialogue-driven nature of the film also gave that fact away from the get-go.

In the story, which centers on the changes in the family patriarch John Henry Brooks, the wife – who he refers to only as Mrs. Brooks – and three children are all taking their lives in different directions. The eldest, whose birth name was Booker T. but who has taken to renaming himself Sharif, is attempting to engage black power causes but struggles with the fact that he is dating a white woman that he does not want his family to know about. The middle child, Ruby, is due to marry a man named Marvin who seems to represent the new, urban, Africa-conscious man. The youngest, Gideon, is the “black sheep” living on the rooftop, practicing some kind of two-bit judo and embracing militant radical black ideals, which will incite him into helping his mother in a full-on revolt against the domineering, ultra-conservative lifestyle that her husband demands. By the end of the film – which didn’t win any Academy Awards – all is made right at Ruby’s wedding, when John Henry finally relinquishes his stranglehold on the family and his uncompromising insistence on old-school values, and the family is made whole again.

Though it is lumped into the “blaxploitation” genre on IMDB, Five on the Black Hand Side is hardly an action-packed flick like Truck Turner or Superfly. It does employ some of the slice-of-life comedic scenes that can be found in other blaxploitation films like Dolemite, but this one takes on a subject of much greater (and more realistic) relevance: the ways that the values of a new generation can splinter their relationships with older generations. John Henry Brooks is the owner of a black barbershop, a child of the Depression and a product of segregated America, but his grown children are exploring the fresh ideas of the post-Civil Rights 1970s. Demanding to maintain his unchallenged status as the family’s decision-maker, John Henry’s somewhat buffoonish behavior belies the silly notion that older people can stop change from occurring and somehow maintain control. Happiness will only come when the mothers and fathers reconcile themselves to the new world order. Mrs. Brooks finds that truth earlier in the film, albeit in an odd way, but the harder-nut-to-crack, Mr. Brooks, takes much longer.

I wanted to watch Five on the Black Hand Side because I am interested in black films from the 1970s. I’ve seen a bunch of them. I hadn’t heard of this one, and although it lacked a certain measure of quality, it did have some appeal. Its conclusions were rooted in the importance of people over systems or ideals, in the dignity of common people in the face of any kind of oppression, and in the family as the penultimate good. Behind the clichéd shouting of “Power to the people!” lay something greater than the rote repetition of that pop-culture mantra: the basic notion that we have to stick together, without letting personal squabbles take focus off of what really matters.