As our bus rolled down rural Highway 14, which sprawls loosely between Selma, Alabama and the iconic Sprott Post Office, we passed the sign for Hamburg, the tiny farming community where Mary Ward Brown wrote her brilliant stories and memoir, and I tried to apprise the busload of students of it. The few who heard me over the roar of the charter bus turned their heads vaguely as we passed the inauspicious left turn. A few then looked back at me, waiting for more, while others told their classmates who hadn’t heard me what I’d just said. It was hard to teach in such a setting, but I tried anyway.

We had just visited the Edmund Pettus Bridge, where I had my students start on the downtown Selma side and walk the arc of the bridge so they could get a physical sense how the marchers in 1965 could not see the small army of state troopers on the other side until it was too late to turn back. After a brief stop in the visitors center, they also got to browse the low-slung lobby of the supposedly haunted St. James Hotel and peer into the lush, dark courtyard at the center of that pre-Civil War structure. Now, we were rolling down a two-lane back road, moving further northwest into Alabama’s Black Belt.

When we arrived at Sprott Post Office, I loaded them off the bus as I listened to their murmurs. What is this place? Why are we stopping here? This is it? The simple wooden building with a rickety porch, made famous by photographer Walker Evans in the 1930s, still stands, all by itself, boarded up and unused, now painted white and sea-foam green, at the cattywampus intersection of two two-lane roads, 14 and 183. “Okay, what did you see on the way here?” I asked the crowd of assembled teenagers once they were off the bus and standing in the gravel lot.

“Nothing,” one of the braver students said out loud.

“Exactly!” I replied with verve, and they all gave a start, surprised, I suppose, by that being the correct answer.

The young lady had set me up perfectly: they were seeing precisely what I wanted them to see, learning precisely what I wanted to learn about this isolated locale. To gain a sense of place, they needed to experience firsthand what was here— by their standards, nothing. No movie theaters or shopping centers or Starbuck’s. Yet, here had been the gathering place for a far-flung array of farmers and their families during a now-lost era of one-mule sharecropping hardship, the place where those overworked people went for communications from the outside world, the place where they went to see what was going on, and what did we see? Nothing. Twenty-four miles of small roadside homes, mostly empty fields, hunters’ tree stands, abandoned vehicles, and the occasional sight of either a little store or heavy machinery working the land. In our age of mechanized farming, this once-vibrant landscape has emptied out.

The middle part of the day was spent traversing the short distance between Sprott and Marion, then the slightly longer distance between Marion and Greensboro. After Highway 14 breaks a hard left at Sprott Post Office and heads more westerly, it quickly reaches Marion, the county seat of Perry County, with its old town square and its Zion AME Church, where a busted voting-rights meeting in February 1965 yielded the police shooting that sparked the Selma-to-Montgomery March. But it was Greensboro that was our second destination, where Pie Lab and other new businesses and nonprofits were (and are) sprinkled in the refurbished, modernized storefronts on Main Street among ones that are still dilapidated and crumbling. What’s old is becoming new there, with a lot of hard work and vision, I told them, and I want you to see it for yourselves. (The effort is remarkable enough that The New York Times gave it a write-up back in 2010.) 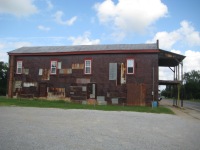 Our final short trek that day took us due south to Newbern, still in Hale County, which would be little more than a smattering of houses and old barns, if it weren’t for the late Samuel Mockbee’s Rural Studio, an architecture program based at Auburn University. (As a side note, a few of the buildings in this area that were photographed by the late artist William Christenberry are still standing and recognizable.) Here, we were met by an alumnus of our high school named Alex, who is now an architecture professor there, and with a gracious smile he toured us through their workspace in The Big Red Barn, as well as through Newbern’s modern-looking fire station and revitalized library. This time, I listened not to dissatisfied murmurs but to proclamations such as: We ought to make our library like this! The last site we visited there was situated in the middle of a saturated vacant lot— a work of architecture/modern art, resembling a underground concrete igloo with metal rebar sticking out the top, which serves as a monument to Mockbee. (To my chagrin, the students’ main memories of Newbern have been their muddy shoes and the confusion over whether the animal carcass they encountered there was a small cat or a large rat.)

We rode home on our big charter bus through Uniontown, the site of an ongoing coal-ash dumping controversy, and back onto Highway 80. Within an hour-and-a-half, I had them back home in Montgomery.

I take students on these trips into the Black Belt – which I affectionately and ironically call my “field trips to nowhere” – for two reasons: first, because I didn’t know about this rich history until I was grown up and I want better for them, and second, because of something that William Zinsser wrote in his seminal book On Writing Well: “Go with what seems inevitable in your own heritage. Embrace it and it may lead you to eloquence.” Even though only a few of my students have direct and immediate personal connections to Dallas or Hale or Lowndes counties, our culture in central Alabama is based on practices, attitudes, and events that were forged in those places. The Alabama Black Belt isn’t nowhere. This is where we are from.  This is our heritage. And not to know one’s heritage may be the most inhumane and most damaging side-effect of our mobile society— to be uprooted, dangling in open space, guided not by family and tradition but by pop culture and economic opportunity, with no sense of belonging to something larger and continuous and beautifully ornate.

Which brings to me now.

Earlier this month, I took my students on another of my field trips of nowhere, this time heading southwest into Alabama’s Black Belt to explore the wide-open space on the southern side of Highway 80 in Lowndes and Wilcox counties, visiting their respective county seats, first Hayneville then Camden, for a day-long primer.

In Hayneville, we stopped at the square in front of the Lowndes County Courthouse to gain that boots-on-the-ground perspective on the August 1965 killing of Episcopal seminarian Jonathon Daniels, who was in Alabama working for civil rights. It was on that square that a local man confronted Daniels then shot and killed him. Twenty five years later, in 1991, a small brick monument was erected in one corner of the square. I took the students to stand in that space, because I wanted them to get a sense of Daniels’ predicament as he faced that situation: in 1965, how do you get back to your home base in Selma when you’re stranded in Hayneville, where no one will help you? It’s one thing to read it in a book or watch it on a video, it’s something else to stand in the spot after driving those roads.

Next, we traveled further down Highway 21 then onto 28, arriving in Camden mid-morning. The bulk of the trip would be spent not in contemplation of civil rights murders, but in homage to the wealth of artistry in the Black Belt. At Black Belt Treasures Cultural Arts Center, the students got a walk-through of the region’s painting, pottery, sculpture, and craft-making, and two blocks away, they were given a personal tour of Betty Anderson’s Shoe Shop Museum, a low-slung, homespun hodgepodge of outdated cobbler’s tools, small-town local business memorabilia, and a pictorial history of the civil rights struggle in the Deep South. At the two locations, students were introduced to the hearty and vibrant creativity that was often born of necessity. It is in these places where otherwise urbane people can see the intelligent DIY spirit manifest itself in everyday use by people who have less or little in the way of economic resources. Here, beauty comes not from an excess of time after the work is complete, but from a sense that beauty is compatible with and simultaneous to work and its implements.

After a wonderful lunch at the Gaines Ridge Dinner Club with storyteller and quilter Betty Kennedy, followed by a walk around the grounds of that 1820s farmhouse, we ended our visit back at Black Belt Treasures to meet and talk with Minnie and Tynie Pettway, two of the famed Gee’s Bend Quilters. The sisters, who are now 79 and 82 respectively, were stitching away at table when we arrived, but that didn’t deter them. With humor and vigor, they answered the students’ questions and let their minds meander across subjects as varied as quilting, the farming life, segregated schools, the difficulty of gaining the vote, sibling relationships, pranks and toys, and the corporal punishment of children: “If there had been such a thing as ‘child abuse’ when we were young, our momma would have been in jail so long she wouldn’t have known us!” one of them half-joked.

These hard-working women also explained with humility and honesty about their ambivalence toward fame. While it has been good to be honored for skill and craftsmanship and for creating beautiful objects, they have also been confused by all the fuss. Ultimately, one of sisters said in her own simple way that, since conceptions of beauty are subjective, what is ordinary to her has been extraordinary to someone else. So, okay.

After nearly two decades of delving into the grassroots culture of central Alabama, I have gotten accustomed to sentiments from people who want know, Why these people? I would never respond with these exact words but my answer runs counter to glitzy, albeit wrong-headed conceptions about what is important: Because I know that they’re not nobody. Just like I know that Alabama’s Black Belt is not nowhere. For totally different reasons, passersby and locals alike might presume nothing extraordinary occurs in central Alabama, especially not in the isolated Black Belt. Quite the opposite is true. While our current culture hyper-focuses on fame and wealth and urbanity, being a teacher of teenagers who are inundated with that hyper-focus and its wrong-headedness, I feel like I have to do for them what a teacher should do: show them better. Whether that means visiting a boarded-up rural post office, walking across a bridge most Americans had ever heard of before March 1965, giving them time to wander around small-town Main Streets, or listening to two sisters who’ve done their best with what they’ve had, I want for my students to see and to understand what is inevitable in their own heritage, so that – hopefully – it will lead them to eloquence.