Feeding the Family, Part One

The challenge as a parent (and as a person with a long family history of heart attacks) is: I’m fighting a constant battle against the brightly packaged, sugar-added “food products” that were born in laboratories, not in the earth. And I’ve become convinced, the more I read and pay attention, that these Frankenstein-foods are at the root of our collective unhealthiness, and also of our dependence on a system in which we need the insurance to pay for the drugs that will be prescribed by the doctors to counteract the effects of sitting around and eating trash.

I can be guilty of this, too. My work as a writer is mostly sedentary, and my work as a teacher means that leaving campus for a meal is difficult. Getting up to move around and having healthier, fresher foods on-hand both require forethought and effort on my part, since neither is a naturally occurring aspect of my typical weekday. Rather than involving physical activity, my work is often done hunkered over a keyboard or a student’s paper for so long that my upper back has to crackle and crunch itself back into the upright posture of a homo sapien. And when it comes to carrying a lunch and snacks, it is so much easier to choose foods that are pre-packaged and don’t need refrigeration, which means they’ll be processed and loaded with preservatives. 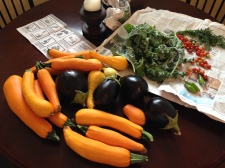 So how can an ordinary guy like me, who grew up not on a farm but in the suburbs, who works indoors at a desk, and who has always eaten some processed foods, reform my eating habits and improve my overall health? No matter what that new way of living may look like, I have already learned that it isn’t easy, because modern social forces and a corporate food system work against this goal. First of all, processed foods are often cheaper, and when I’m trying to fill the bellies of two adults and two growing children, quantity does matter. Not only are healthier foods generally more expensive, our family meals are not such that I can plate a four-ounce piece of lean meat garnished with three bright-green asparagus stalks and call that “dinner.” If my children don’t get full on what’s on their plates, they’ll be hunting the cupboards for junk all evening. Second, to have fresh, local produce often requires shopping more often and in markets other than traditional grocery stores— that takes time and gasoline. Of course, there are community supported agriculture operations (CSAs), but I still had to go pick up my shares, which is no easier than making a special trip to a farmers market.

Back in 2010, I interviewed David and Margaret Ann Snow, who own and operate the Snows Bend Farm CSA, and in explaining why CSAs are important, David remarked that it really isn’t possible for the average American family to raise all of their own food. The time, equipment, and supplies (and knowledge) are out of reach for most people today, and then there’s the issue of land ownership. Buying the land and putting a house on it would require a mortgage for most people, and if the land were used for subsistence farming, paying the loan would mean working another job beyond the farm. Notwithstanding that logistical problem – Snow didn’t say this, but I’ll add it – the other issue is that not everyone wants to grow their own food. Some just want to eat it. Moreover, not everyone is physically capable of doing farm work.

While I’m not sure whether I would want to be a full-time farmer, I am certain that I (and my wife) want for our family to eat more fresh, locally produced fruits, vegetables, meats, and breads and less chicken nuggets, boxed mac-and-cheese, Gushers, and Lucky Charms. By the time our first child was born, we had virtually cut fast food out of our lives after watching the 2004 documentary Supersize Me, and when the kids were small, we chose organic milk and hormone-free meats as a strict rule. These days, a busy life sometimes necessitates running through a drive-thru, and those lofty ideals about healthy eating aren’t always sustained. Though I can’t speak for anyone else in my family, I’ve found that fast food no longer tastes good to me, and moreover, since I seldom eat it, I notice how badly I feel after I do— which is kind of nice, because it keeps me away from it.

What I’m driving at is: in every aspect of life doing what’s right requires conscientious effort, and eating is no different. In Montgomery, Alabama, where I live, there are twelve McDonald’s, thirteen Burger Kings, eight Wendy’s, eight Hardee’s, three Jack’s, six Taco Bells, five Zaxby’s, six Chick-Fil-As, five KFCs, five Popeye’s— and seven farmers markets, one Fresh Market, and one Whole Foods. And despite that numerical imbalance in my locale, apparently it’s getting worse nationally. While I was working on this post, I read an NPR story in mid-March whose title asked-and-answered, “Why Are So Many Farmers Markets Failing? Because the Market is Satured.” It made me think of Lou Rivers’ one-act play “This Piece of Land” about an African-American family in Depression-era South Carolina who are on the verge of losing their farm to an overdue mortgage, which they can’t pay because the market is glutted with crops no one has the money to buy. The main character Rosa asks, of being unable to sell her husband’s crops, why there are so many hungry people, when there’s so much food you can’t sell. That’s kind of what I’m asking myself: how can prices stay so high and availability fall so low when so many people want safe, healthy food? Moreover, how can it be cheaper to run real foods through all those machines and add all those chemicals and truck it all over the country than it would be to pull a naturally occurring thing out of the dirt and eat it nearby and soon after? To an ordinary guy like me, it doesn’t make sense.

On the bright side, another article that I came across while writing this post explained that Amazon-owned Whole Foods began cutting its prices on April 3:

Whole Foods will slash its prices on hundreds of products, with a focus on produce, such as greens, tomatoes and tropical fruits. Customers will save an average of 20 percent on the new reduced-price items.

That’s good news, especially for us since my wife and I have Amazon Prime, which is part of the discount schedule. Though I don’t typically shop at Whole Foods, since it’s nine miles across town from where I live, these discounts and price-cuts do make it more attractive than before. Once again, though, there is a downside: if those of us in my neighborhood don’t patronize the grocery store near us, will it eventually close and become a food desert . . . ?

This main question is at the heart of my search: how can an ordinary guy like me, who grew up not on a farm but in the suburbs, who works indoors at a desk, and who has always eaten some processed foods, reform my eating habits and improve my overall health?