If you read this column often, or even seldom, you know that I have a strong interest in finding, researching, and sharing previously untold and neglected stories. Whether it is a 1975 police shooting in the Whitehurst Case or the sinking of the illegal slave ship Clotilda in 1860, these stories are the mortar that hold together the bricks of our history. Without them, major events seem disconnected and without context, floating in the historical air without roots. 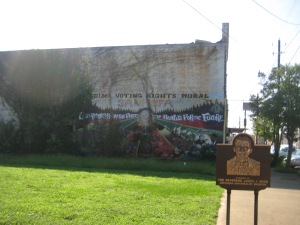 Which is why I was pleased to see NPR’s new White Lies podcast that examines the 1965 killing of a white preacher named James Reeb. Created by Andrew Beck Grace (of Eating Alabama fame) and Chip Brantley (author of The Perfect Fruit), White Lies takes on the matter of Reeb’s death in Selma in the lead-up to the Selma-to Montgomery March. Reeb was a Unitarian minister, originally from Kansas and living in Boston, who came south to join the march after Bloody Sunday, March 7, 1965. However, he didn’t get to march because he was beaten down in the street on March 9 and died soon after. Along with Jimmy Lee Jackson and Viola Liuzzo, Reeb’s name remains well-known among those close to this history, but widely neglected in more surface-level discussions, which tend to focus on Rev. Martin Luther King, Jr., Gov. George Wallace, Judge Frank Johnson, and Pres. Lyndon Johnson, and sometimes Jim Clark and Al Lingo.

The podcasts has four episodes so far, with one more coming out today. The first covers the basics – of Selma, the march, Reeb’s presence there, and his death – combined with commentary about why the story is both obscure and important. The second, third, and fourth have delved into the contradictions and the obfuscation, while remarking on the challenges of researching long-obscured history. Grace and Brantley narrate, tying together archival audio with recent interviews, which bring us nearer to the time and place – the Black Belt of Alabama in 1965 – where resistance to the Civil Rights movement led to violence and killing.

At one point, in the first episode, Andrew Beck Grace says, “Spending time in Selma is like this— a nearly constant technical and often bitter relitigation of the minutiae of the past.” He hits on one of the reasons that the South’s history of racial injustice has yet to be untangled, much less reckoned with. Trying to deal intellectually with this history, which is not only legal and social but also emotional and personal, raises all kinds of issues: with nuance, with cooperation, with honesty. What makes sense is not necessarily going to be allowed to prevail by those with a vested interest in the silence and forgetting.

I’m thankful not only that Grace and Brantley have taken on this story, but that NPR is airing it with such prominent placement. Every time I open their app to check the day’s news, there is the podcast’s logo right below the first three news items. If you haven’t yet listened to the podcast, or more importantly if you don’t know about James Reeb, I can relay that White Lies is well worth the time and attention.