The first time I heard of All God’s Dangers, I was about fifteen and got the chance to see the Alabama Shakespeare Festival’s one-man show based on the book. The production starred Cleavon Little, of Blazing Saddles fame, and it always stuck with me. Though I had no connection to the story of Nate Shaw/Ned Cobb, it was still compelling, even to a teenager with little interest in folk life or state history.

Some time after seeing that production, I encountered a copy of All God’s Dangers in a used bookstore called The Book Nook. The copy was a mass-market paperback from the mid-1970s, and I read it pretty quickly, though I doubt if I absorbed it.

More than a decade later, in 2002 and 2003, I came across the story of Nate Shaw/Ned Cobb while working at NewSouth Books. The company was publishing a volume of selected poems by a poet I’d never heard of, John Beecher, and among the longer ones on the collection was “In Egypt Land.” As I read it, I remember thinking, I know this story. Beecher had been a journalist writing an article for Social Forces about the shootout between black sharecroppers and white sheriffs in east Alabama in the early 1930s, and later recounted the events in verse.  (In the years that followed, I wrote the first-ever book about John Beecher, with “In Egypt Land” being part of his story.) 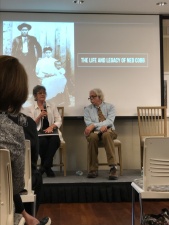 Perhaps it was fortune, then, that brought me together with All God’s Dangers again when it was included in a graduate-school course on Alabama’s Black Belt. This time, reading its sprawling narrative came easier, since I had the historical context to go with it and an adult writer’s mind with which to process it. The book remains one of my all-time favorites, so I couldn’t pass up the opportunity when I saw that the Caroline Marshall Draughon Center for the Arts & Humanities in Auburn was having a symposium on “The Life and Legacy of Ned Cobb”— and the author and his wife, and members of the Cobb family would be there. I would finally get to meet Theodore Rosengarten. 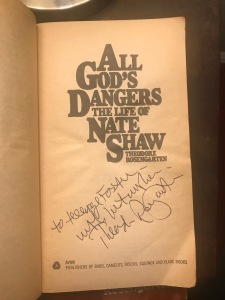 Though I only got to talk with him for a scant moment, it was nice to put a face with the name that I’ve known for so long. All God’s Dangers was published (and won the National Book Award) the year I was born, and I first heard the story in my teens, but I have enjoyed it for about thirty years now. Dr. Rosengarten was gracious, though a bit rushed, remarking that my old mass-market paperback was a rare find, since they didn’t print many. I got to explain my relationship to the story, then got the autograph that I’d come over for. He was even kind enough to make it out “to teenage Foster.”