When it opened in the 1890s, Montgomery, Alabama’s SH Kress & Co. store was built with two entrances: one on Dexter Avenue for white customers, and one on Monroe Street for black customers. Kress was something like a department store with a lunch counter, and the one in Montgomery was the company’s third location. Being on downtown’s main thoroughfare, a half-block from the Court Square fountain, its location meant that it was a busy place. The store burned in 1927 but was remodeled beautifully in 1929, yet its bustling grandeur couldn’t save Kress from extinction. The whole Kress chain folded in the early 1980s, though Montgomery’s store stayed open for a while longer. By the end of the 20th century, the building was empty. 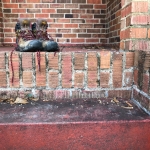 So it was with great pleasure that Montgomerians received the news that a developer had purchased the Kress building for renovation. The work of bringing the downtown landmark back to life began in 2015, and the building opened in 2018. The revitalization project that yielded Kress on Dexter made national news, in part for its preservation and presentation of the old marble walls that declared which water fountain was for which race. Kress on Dexter is a mix of historic and modern and still has two entrances, but now its contribution to Montgomery is more about openness and diversity, housing the Civil Rights-focused More Than Tours and 1977 Books, which calls itself an “Abolitionist Libería,” as well as a public-access storytelling booth and the Prevail Union coffee shop.

Tonight, our Creative Writing magnet’s poetry reading will be held in Kress on Dexter’s gallery space on the first floor. This is our second year having the reading there. When our school burned last August, we lost the on-campus black box theatre that we once used, so it has been wonderful to be welcomed into such a beautiful space. For those who might be interested in coming to the reading tonight, we seat at 6:30 and begin at 7:00. Admission is free. We’d be glad to have you.