In 2020: Re-Arranging the (Mental) Furniture

When blogging and other new media, like YouTube, began to emerge amid cuts to newsrooms and declines in book sales, I jumped at the chance, first on Blogger and later on WordPress. Within the twenty-first century’s paradigm shift, as people have moved away from print media and appointment television and toward online (and now mobile) browsing and streaming, this relatively new and distinctly democratic platform has been a God-send for writers like me. And, for nearly ten years, Welcome to Eclectic has given me a platform for publishing anything I saw fit: short essays, poems, a column.

However, there are also downsides to writing a blog. Coming up with ideas and writing posts requires constant attention, and it also urges a writer forward with the idea, why seek out other venues for my work when I’ve got my own? This idea became especially prominent as the number of visitors increased over the years from hundreds to thousands. Yet, these factors added up, for me at least, to mean that I’ve spent little time seeking opportunities in mainstream publications, submitting poems to literary magazines, or revising works that I completed then set aside. So, I made the decision in 2019 to shift back to a more traditional approach toward writing and publishing that includes a blog but doesn’t have a blog at the center of it.

Thankfully, I’ve got plenty to keep me busy. I’ve begun work on a book about our local Catholic school, which was founded in 1873 by the Sisters of Loretto. The school’s 150th anniversary is coming up in 2023, and the book will be both historical and commemorative. The goal is to produce a stand-alone work that offers a substantial but accessible narrative about the school and its evolution over a century and a half. Right now, I’m only researching, mostly reading, but the writing should begin in earnest later this year.

In addition to that new project, there is the Fitzgerald Museum’s annual Literary Contest. We got more than four times as many submissions this second year as we did the inaugural year, so I’ve been pleased to see that the word is getting out. Both years, submissions have come in from all over the US, even a few from overseas. The deadline for students to submit passed on December 31, and the judging is now underway.  Over the next two months, we’ll have the judges – poet Kwoya Maples Fagin and novelist Joe Taylor – reading them to determine our winners, which will be announced in March. Then, we’ll open the contest up for submissions again in September and start all over! 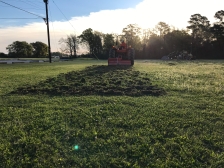 Of course, I’ve also shifted some of my time and attention to leading the sustainability efforts at my school and to participating in the Old Cloverdale Community Garden in my neighborhood. I recently went to both the Camp McDowell Farm School and the Alabama Sustainable Agriculture Network’s Food and Farm Forum, and my goal is to apply some of that new knowledge here at home. The nice side of this new work is that it doesn’t really feel like work. The more I tinker and grow and build and learn, the more I enjoy it, and considering how much time I spend at a desk, writing or grading papers, it has been nice to get outside and move around more often.

Finally, last fall I joined the board of the Alabama Campaign for Adolescent Sexual Health, an organization whose mission is to help young people make “evidence-informed” decisions in these deeply personal matters, decisions that can have long-lasting effects on their lives. While this subject matter is outside of my wheelhouse, as a high school teacher, it concerns me that my students live in the “most sexually diseased city in the nation.” The Campaign provides training, resources, and advocacy with the goal of having teens and young adults to make choices based on facts, not guesses, myths, or rumors, though my role on the board is mainly in providing the perspective of a classroom teacher who works with teenagers in a public school.

For me, 2020 is going to look different from previous years. Notwithstanding the normal propensity for using the new year as an opportunity to change one’s life, I can feel that the time has come for significant change in mine. The first two decades of the twenty-first century have been productive, but they’ve also flown by, dominated by a work regimen that I built in my late twenties. Now, in my mid-forties, I’ve been working and living that way for more than fifteen years, with varying degrees of success, and it seems, at least, like the time to rearrange the (mental) furniture.