When the subject of Generation-X films comes up, everybody remembers the John Hughes classics The Breakfast Club, Sixteen Candles, and Pretty in Pink, and Cameron Crowe’s Say Anything and Singles, and Kevin Smith’s Clerks and Chasing Amy. A more attentive movie buff might also remember Repo Man or Kids or Blue Velvet, or there’s even the possibility that a few of you wandered naively into The Crying Game or Paris is Burning or The Pillow Book and never have been able to forget what you saw. Or maybe you went out on a limb once or twice back in the ’80s and ’90s and tried to watch those cool new movies people were talking about, like Videodrome or Slacker or Wild at Heart. But there’s much more, and I keep thinking of movies that I didn’t include in the first ten I offered, or in the second ten that followed, so here’s one last round of ten more that might have gotten lost in the shuffle.

Starring mild-mannered 1980s mainstay Timothy Hutton, best known as Conrad from Ordinary People, this movie is all about sticking it to The Man. The main character’s brother is a New York City firefighter who has been hurt in an accident, but he is denied benefits from the city. In response to the injustice, our hero begins to graffiti messages against the mayor . . . which, of course, causes the mayor to demand that it stop, leading to the inevitable confrontation between our righteous Everyman and the powerful leaders who don’t want to be challenged.

I learned what hypoglycemia is from Three O’Clock High, a classically ’80s movie about high school social boundaries and bullying. The story focuses on Jerry, a weakling teacher’s pet who gets assigned to write a school newspaper story about a new student at the school, the leather jacket-wearing badass Buddy Revell. Unfortunately for Jerry, he claps Buddy on the arm while arranging his interview, prompting the tough guy to tell him that they will fight after school. Jerry spends the day dreading what he is sure will be a royal (and very public) ass-kicking. This was Richard Tyson’s movie debut, coming out the year before he played the mysterious love interest in Two Moon Junction and a couple of years before he was the psycho dad in Kindergarten Cop.

In Rumble Fish, director Francis Ford Coppola had some of the same cast of the now-classic The Outsiders, but with its black-and-white surrealism, its bald focus on teenage anger, and its themes of police brutality, Rumble Fish was never going to be as successful or well-known. Where The Outsider kept our attention on the compassion and naiveté of Pony Boy and Johnny, this movie gave Matt Dillon another chance to play the disgruntled young man, this time as the lead who is ambivalently pining away for the return of his brother Motorcycle Boy, played by Mickey Rourke.

Back in the ’80s, Mickey Rourke was the cool dude – usurped later by Johnny Deep, when 21 Jump Street came on TV – with his smug arrogance, mumbly cadences, and greasy hair. The year before this, he was Motorcycle Boy in Rumble Fish, and in the years following, he starred in 9 1/2 Weeks, Barfly, and Angel Heart. This strangely titled movie caught my attention when I was a kid, but I didn’t watch it until much later. The Pope of Greenwich Village tells the story of two young friends who screw up royally and end up with both the police and the Mob after them. 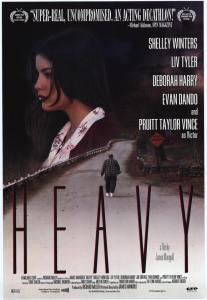 Part one of this Liv Tyler twofer, Heavy had her playing a sweet, young waitress named Callie who gets a job in a small café owned by the painfully shy, overweight, middle-aged cook Victor and his mother. The movie is mainly about Victor, who dreams of becoming a chef and has a crush on Callie. Sadly for him, though, Callie’s rude boyfriend, played by Evan Dando of The Lemonheads, stands in the way of Victor and Callie even becoming friends. This is a very good film, which also co-stars a middle-aged Debbie Harry (from Blondie).

Part two of a Liv Tyler twofer, this movie is visually striking, has a great soundtrack, and a stellar cast. This time, Tyler plays a teenage girl who travels to the Italian countryside in search of answers about her father, and to find those, she stays on a hilltop villa full of eccentric artists. Of course, there’s a love story sub-plot, too. In addition to Liv Tyler, who was the beauty du jour in the mid-’90s, director Bernardo Bertolucci has Jeremy Irons as a dying poet and Donal McCann as a stodgy old artist. This is also just a great film.

My Science Project is not a bad little 1980s, sci-fi/fantasy, teenage comedy, but it probably didn’t stand much chance since it came out the same year as another sci-fi/fantasy, teenage comedy: Back to the Future. In this one, the main character, a machine-head who lives for auto shop and junkyards, doesn’t team up with a wacky doctor and a flux capacitor; he finds one of those globes like they used to sell in Spencer’s, the ones that attract electricity to your hand, and it brings on all kinds of crazy consequences. Along with his mouthy sidekick and would-be girlfriend, his half-baked effort to avoid a science assignment gets him in over his head.

Time Bandits was one of the mainstays of Saturday or Sunday afternoon TV, when random programs and obscure movies got played, probably by hapless interns who manned the controls while the legitimate broadcast professionals were off. This movie is weird and British and smacks of the old Dr. Who. It features a child main character, John Cleese from Monty Python, and of course, steam-punk midgets. Time Bandits is a reasonably good fantasy film for its day, but in retrospect, it’s pretty quirky.

This movie about a struggling brother-sister rock band came out in the late ’80s and showed Michael J. Fox in a different kind of role than young Republican Alex P. Keaton in Family Ties. The sister is played by Joan Jett, whose 1982 cover of “I Love Rock N’ Roll” gave her mainstream fame (after being in The Runaways), and the conflict surrounding the band’s efforts to succeed are complicated by the fact that she is a single mother who leaves her child at home. One little known fact about the movie: Bruce Springsteen wrote the title track that the band plays as their signature song.

This last one is from the nerd-turns-cool subgenre of 1980s comedies. The story starts with the cool dude from the ’60s who dies in Rebel Without a Cause-style chicky run, but comes back as a guardian angel to help an ’80s teenager find his mojo. The cast includes Richard Mulligan as a Heaven-sent helper a la Clarence in It’s a Wonderful Life, and the dad is played by Mark Metcalf, who was best-known to our generation as Neidermeyer in Animal House then as the mean dad in Twister Sister’s “We’re Not Gonna Take It” video. The Heavenly Kid has all the typical ’80s high school stuff, including the makeover into the totally dated clothes and the fickle, blonde popular girl who our loser-hero dreams about, but it also has a twist in its story.