Still Life with Oysters and Lemon by Mark Doty 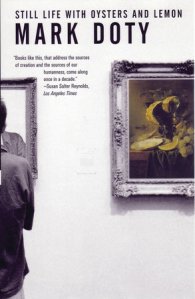 This is where being open to suggestions works out well. It was 2008, and I was told by my friend Nancy Grisham Anderson that Mark Doty had been offered the Weil Fellowship at Auburn University at Montgomery, my alma mater. I was familiar with Doty as an extraordinary poet from his inclusion in anthologies and other projects, and was excited that he was coming to give a public lecture in Montgomery. Nancy told me that he would be talking about his book Still Life with Oysters and Lemon. Though it had been published in 2002, I’d never heard of it.

Though I had to fly through Still Life with Oysters and Lemon right before Doty was coming to speak, I’ve read and re-read it multiple times in the twelve years since. At less than 80 pages, it doesn’t take long, though I don’t want to be misunderstood to mean that the book is easy or simple. It is short. It’s also complex, packed with meaning, and really beautiful. The book functions like a long essay that weaves among subjects, prime among them still life painting.

More so, Still Life with Oysters and Lemon is about intimacy, an idea that Doty comes back to several times. Using the idea that a still life captures a moment through temporal objects, he carries the reader through a somewhat stream-of-consciousness narrative that includes his grandmother’s peppermints, his deceased partner Wally, his purchase of fixer-upper home with a new lover, his birthday, and of course, his ideas on poetry. What I like about Still Life with Oysters and Lemon is that it seems like Mark Doty is just talking to me about what’s on his mind.

This time, I was re-reading it because I’ve decided to teach it in the spring. In this time of virtual learning, which is off the beaten path, I’ve been looking for works that are off the beaten path and that emphasize out common humanity. I had considered this one and Annie Dillard’s For the Time Being, but opted for this book since it’s shorter and I want the students to (actually) read it. For my part, there are only a few works that I have read over and over because they’re keenly and adeptly insightful, distinct in their awareness of our predicament, our nuances, our trifles, our struggles, and because they speak to me. Still Life with Oysters and Lemon is one of those books. I hope that that is recommendation enough. The only other things I can say: I’m glad that Mark Doty wrote it and equally glad that Nancy turned me on to it.