Reading: “The Return of the Prodigal Son” by Henri Nouwen 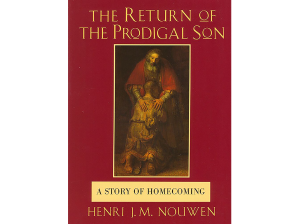 The Return of the Prodigal Son by Henri JM Nouwen
My rating: 5 out of 5 stars

It’s a story that most people know, at least partially. In the Gospel of Luke, Jesus tells the Pharisees about a young man who gets his inheritance in advance, leaves home, and squanders it, then comes home starving and desperate to his happy, forgiving father and bitter, resentful brother. Henri JM Nouwen’s short book, published in 1994, explores this Christian parable using the 1669 painting of the scene by Dutch master Rembrandt van Rijn as a framework.

Nouwen writes about the painting as a catalyst for a spiritual journey. He took a special interest in the artwork when he saw a print of it in someone’s office, then later got to see the painting itself in St. Petersburg, Russia. Thus, his book has three parts – the prodigal son, the resentful brother, and the forgiving father – which are framed by a narrative about his personal experiences with Rembrandt’s representation. Throughout his discussions, Nouwen reminds his reader that we aren’t necessarily going to be one or the other of the two sons. On some occasions, we are more like the wasteful younger son who is open to redemption; at other times, we are more like his bitter older brother who has not strayed but remains closed. But no matter which, the forgiving father who wants his children to be happy and cared for will always be there, offering a joyful home no matter what.

One nice thing about this little book is how accessible it is. It could be tempting to assume that a highly educated Catholic priest discussing a Biblical parable in the context of a Renaissance-era painting might require a lot from readers, but Nouwen doesn’t. The style and the message are clear and easy to follow. The length is also very manageable at about 150 pages.

In my own reading, one passage stood out particularly: “Real loneliness comes when we have lost all sense of having things in common.” Nouwen had been writing in this first section on the younger son about how we often let the world define and forge our own sense of worth. This sense of deserving to belong or earning admiration then creates a sense that it can also be lost. However, God’s love – like father’s in the parable – isn’t like that at all. He simply wants us to be home, with Him, and a part of the joy that He offers. There’s no deserving or earning it, so each one of us always something in common with others— call it the human condition, maybe. And though this book was published twenty-seven year ago, it was a welcome reminder about our interconnectedness as we continue to traverse the COVID-19 pandemic, which has involved periods of separation, quarantine, isolation, and dissociation from each other.