On Tuesday evening, November 1, Huntingdon College’s Houghton Library will be hosting its annual mini-conference. This year’s theme is “Good Trouble,” a phrase that comes from the late Civil Rights activist and congressman John Lewis. 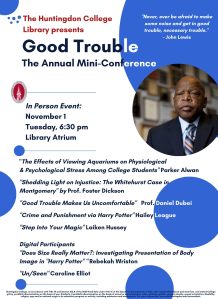 I will be giving a ten-minute presentation on the process of researching for and writing Closed Ranks. I began the research in 2013, after discussing the possibility of a book about the Whitehurst Case with the victim’s youngest son and widow. The process continued through 2014, 2015, 2016, and 2017 with interviews, archival searches, and a longwinded effort to obtain federal court records. The book was contracted by NewSouth Books in 2017 and published in November 2018.

The Whitehurst Case is an unfortunate and neglected aspect of Montgomery, Alabama’s history. The victim Bernard Whitehurst, Jr. was shot and killed by a Montgomery police officer in December 1975. It was later alleged that a gun found near his body may have been placed there by police. A controversy followed in 1976, but no officers faced criminal charges in Whitehurst’s death. Ultimately, in 1977, nearly a dozen officers, including the city’s public safety director, left the department, and the mayor resigned amid charges that he was aware of a cover-up. Despite the public nature of this controversy, including the resignations, the family did not find justice in the courts, nor in voluntary compensation from the City. Thirty-five years later, in 2012, the City of Montgomery apologized to the Whitehurst family and placed a historic marker to the Whitehurst Case near City Hall. In 2015, a second marker was placed on the site of the shooting. Closed Ranks was written during the period that followed the 2012 events.