I was pleased, about two weeks ago, to receive an email from a recently graduated former student telling me that she had won second place in an essay contest sponsored by Equal Justice Initiative. The young woman is attending the University of Alabama now, and wanted to be sure that I’d be at the awards ceremony. Of course I will, I told her. That pleasure grew when one of my current seniors told me later that day that she had received an honorable mention. And it was like the cherry-on-top to get another email last week from the parent of another recent graduate, saying that her daughter, who is in college in New Orleans, had placed first!

The essay contest was rooted in an EJI event last spring, which had New York Times journalist Nikole Hannah-Jones in Montgomery speaking about issues of race, justice, and education to students during the day then to a general audience that evening. Students from both public and private schools in Montgomery who attended the daytime event were invited, as a follow-up, to write and submit essays responding to what they’d heard from Hannah-Jones, and I pushed my students to take advantage of the opportunity– not only because it was writing contest, but because it would mean considering her ideas in a serious way. Late in the school year, an essay contest is a hard sell, so I was proud of them for putting in the work. I am even more proud that these three were recognized for that work on Tuesday evening at a ceremony that accompanied an advance screening of the new film Just Mercy.

I first met Bryan Stevenson in late 2014, when his then-new bookwas my main pick for the nonfiction lead title at the 2015 Alabama Book Festival. At the time, I handled the selection of nonfiction for the festival with my friend and colleague Nancy Anderson. I knew about Equal Justice Initiative’s work through a family member who worked there and from taking students to their law offices on a field trip. Their in-office presentation back then contained some of the images now seen in their two museum sites, and I’ll admit that a few of the images affected me so strongly that I had to leave the presentation for a moment to avoid melting into tears in front of my students.  Even without reading the book, I had an idea of what its powerful content would be.

Stevenson was a gracious man to work with in that process. I had halfway expected someone in his position to be haughty, self-important, and dismissive of me, a writer and teacher who was volunteering for a literary festival. He was none of those things. Over the phone, his soft voice was gentle and his tone appreciative. He agreed immediately to what I offered, in part since I had given him plenty of advance notice about the date. As the April event approached, the reviews and praise flourished, and it was clear that he would draw a crowd. I didn’t moderate his talk, since my students and I have a display table at the festival, but did meander over and listen. Having dealt with Stevenson only over telephone and email, I had to tell him who I was when I went to the author tent to get my copy autographed. Once again, he smiled, shook my hand, and thanked me graciously for inviting him.

Since then, Bryan Stevenson has been featured on awards shows, talk shows, and national news, and EJI’s public profile has increased dramatically. In addition to his own story, told in Just Mercy, St. Martin’s Press published exonoree Anthony Ray Hinton’s The Sun Does Shine in 2018, and it was then picked up by Oprah’s Book Club. Also last year, the widely acclaimed Legacy Museum and National Memorial for Peace and Justice opened and have drawn hundreds of thousands of visitors to Montgomery to survey the often-undiscussed aspects of our history that are depicted within. Though I avoided the initial rush, I’ve been to both sites several times now, with students and as the master teacher for an Alabama Humanities Foundation teacher workshop on justice issues. So, it was with great interest, as a follower of these issues and narratives, that I accepted the invitation not only to see my students honored but to get an early glimpse of the movie adaptation of Stevenson’s book.

The film, which I won’t describe in detail since it hasn’t been released yet, does a good job carrying  the book onto the screen, though it does leave out some of the content (for time reasons, I’m sure). Stevenson is played by Michael B. Jordan, and the story centers on his first big success obtaining the release of Walter Macmillan, a man wrongly convicted of a brutal murder in south Alabama. The film is dramatic, emotional, and captivating as it shares the upward trajectory of EJI along with the commensurate obstacles. As we watched, the audience in EJI’s auditorium cheered and wept and let out scattered uh-huhs and that’s-rights throughout the screening. Afterward, Stevenson came out to say a few words and shared that Just Mercy will open in six cities on Christmas Day, with screenings in Montgomery a few days a prior. I was glad to hear that our local community would have dibs on seeing it first. 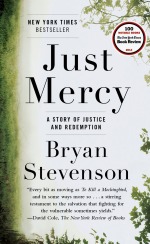 If you’ve read any of my Southern Movie posts, you’ll know that I pay particular attention to representations of the South, particularly of my home state of Alabama. Just Mercy casts Alabama in a distinctly negative pall, but there’s a reason why that doesn’t bother me this time: the events portrayed are true.  Just Mercy does include the stereotypes of the corrupt Southern sheriff and the flippant Southern prosecutor, but this time, they may be dramatizations, but they aren’t fabrications. I’ve read the book twice, as well as Hinton’s book, I can relay that the film mirrors Stevenson’s written account well. And one thing I’ve noticed about Bryan Stevenson is: some people disagree with his goals or with his work, but no one contradicts his narrative. For my part, I’m glad that this story will reach new audiences, especially those who might not read Just Mercy (or The Sun Does Shine) for themselves. He’s right that we need to bring the truths about injustice out into the open, and there are lots of ways to do that. Sometimes it takes a guest speaker, sometimes an essay contest . . . and sometimes a mainstream movie with popular stars playing the roles.