Dirty Boots: What I’m Thankful For 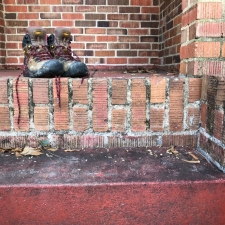 Every year at this time, we’re encouraged to consider and even share what we’re thankful for. Of course, I’m thankful for my family, for the life that God has given me, for health and relative prosperity, and for the opportunity to teach and write as my way of making a living. But I’m also thankful for some other larger things, too.

Close to home, one thing I’m definitely thankful for is the new leadership of the Alabama Democratic Party. Back in October 2016, I wrote a post about voting in the general election and, in it, noted the significant number of Republican candidates who were running unopposed. Our political system can only be enhanced by having two (or more) vibrant political parties, and I appreciate the work that was done to reboot our state’s Democratic Party. Given the realities and consequences of our one-party politics since 2010, it’s clear that having options, diversity, and new ideas will serve to benefit our state.

Farther out, I’m also thankful that our nation’s democratic institutions are responding so vigorously to a time of obvious difficulty. We tend to think of the federal government only as elected and appointed officials who tax us and make new rules for us to live by, but the civics lesson that we’re living through right now has forced us to think about our democracy, how it works, who is operating the machinery of it, and what is and is not appropriate. We had been warned for months that we were moving toward a “constitutional crisis,” and it has clearly come. Complacency is no longer an option in America, and I’m thankful that our country is answering with a vital kind of energy.

Finally, if you read these columns with any regularity, you already know that there are four things that I value very much: education, voting, community, and food. I’m thankful that all four are part of my life, since, along with family and faith, they are keys to a good life. The ability to gain knowledge and wisdom, the right to elect our leaders, the capacity to work for the common good alongside our neighbors, and the blessing of healthy and delicious things to eat are blessings that not everyone enjoys. And while they are not ends in themselves, they are the means by which the best things can be obtained. I’m not only thankful that I have them; I’m also thankful that I understand how important they are.

My hope for this (and every) Thanksgiving is that we’ll pause from our daily doldrums to express gratitude for what we have, to express it also to those who aided us in having it, and to spend some time with people unlike ourselves in doing that. Doing the first of those is easy, saying thank-you out loud among family and friends, to no one in particular, then heading to the table to fix a plate. It’s the second and third that are more difficult: acknowledging the sources and underpinnings of the best parts of our lives, and listening to diverse ideas about what is worthy of being appreciated.