“So what’s next for Foster Dickson?”

During an interview with the Montgomery Advertiser‘s Brian Edwards right before November 1 release of Closed Ranks, he asked me toward the end of our talk, “So what’s next for Foster Dickson?” It’s a question I’ve been contemplating for some time, ever since I finished the manuscript for the book in late 2017. Consequently, it was easy to answer: I’m going to promote this book fully before I even consider writing another one, and I’m going to focus on helping Booker T. Washington Magnet High School recover from the August 18 fire that caused us to move off of our campus.

It feels strange not to have a book to work on. I began the research that would become Closed Ranks in the summer of 2013, and the final product was released nearly two weeks ago. Considering that it was written while also teaching full-time and being a husband and father of two, I spent hundreds of what would have been off-hours in my office over the last five years, poring over research and making sense of how to explain what I’d found. That task is now complete, and was well worth it, but another daunting task is upon us: convincing people to read it.

To back up a bit though, in the late summer, as Randall Williams and I went through the chapters one-by-one so he could send the book to press, one of the buildings at the school where I teach burned. After the fire, the administration and faculty had to regroup quickly, and with the help of the school system, we  moved into an empty school in a week then resumed classes. The mission since then has been to procure answers about BTW Magnet’s future and solutions for how it can occur. For my part, I’ve been sharing the institutional knowledge I have as both an alumnus and a faculty member. A handful of us are also working on developing and incorporating an official alumni organization – something our school has never had – that can aid in the recovery and in a sustainable future.

Those two tasks, along with teaching, “adulting,” and coordinating the Fitzgerald Museum’s What’s Old Is New literary contest, should keep me busy. However, it won’t be all-work and no-play. Between grading papers, writing this blog, and writing Closed Ranks, reading for pleasure has become something I rarely get to do, and I’m looking forward doing that again, especially some of the books that friends have published in recent years. Additionally,  I’d like to get involved with some of the organizations that I’ve seen doing good work in recent years, especially during the last election. There is a lot of progressive action happening in Alabama, and I’d like to be a part of more of it. 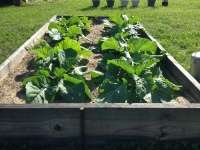 Finally, of course, there’s my school garden, which was mostly left behind when we vacated BTW Magnet’s Union Street campus. I had to leave the raised beds, which were too dilapidated to take apart and reassemble, as well as the tool shed I’d built, since I found that termites had gotten into it. Yet, we’ve got our rain barrel, compost bin, compost sifter, wheelbarrows, and tools— and a gracious plenty of wide-open, sunny space on Hayneville Road. What we’re lacking is a dependable water source and a shed for our equipment. Finding those will take some effort, but it can be done. (If you’re reading this and have the means to trench and run a water line for us, I’d love to talk to you.)

In the meantime, if you’re willing and able, please buy and read Closed Ranks, or better yet, invite me to your school, church, library, civic group, book club, neighborhood association, etc. for a book talk! Last but certainly not least, if you’re reading this post, then you should also consider supporting Welcome to Eclectic.